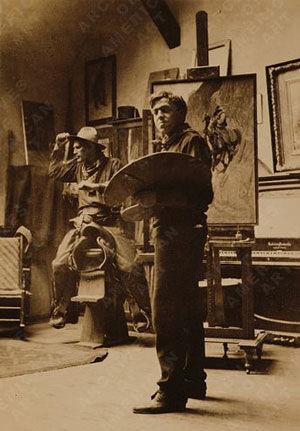 Aside from his father, the one person Wyeth reported to be a major influence in his life and work was his wife Betty, whom he married in 1940; they had two children, Nicholas and James. Betty acted as a manager of sorts with regard to her husband’s art career. Andrew has credited his wife for making him the artist he came to be, not by teaching him in the way that his father did, but by believing in him and his ideas wholeheartedly and refusing to allow him to take up any other profession other than painting. Andrew’s youngest child, who came to be known by his nickname “Jamie”, followed the Wyeth family tradition, and also become an artist. Andrew Wyeth died in his sleep at the age of 91 after suffering from a short illness.

An Artist in Training

Looking at Andrew Wyeth’s works, one would think that he endured years of schooling. Not the case. In fact, Andrew never received any formal training except from his father, who he recognized as one of the most powerful influences and inspirations for his art. As a teen, Andrew even did some illustrations under his father’s name, but soon realized that his passion was for painting. Andrew was home-schooled, which provided his father with plenty of opportunity to steer both his son’s mind and his passion. Although Andrew likened his sheltered existence to a kind of happy jail, he reported gaining a great deal of focus from the experience.

Perhaps one of his father’s most impressive lessons came in the form of a letter, which prodded Wyeth to paint for the purpose and love of painting, not for any desired or intended impact. According to his father, those artists who painted “to score a hit” always missed the mark. Apparently, Andrew took his father’s words to heart, never showing anyone a painting in progress in order to ensure that their opinions (whether favorable or unfavorable) would not affect the process.

In Praise of Andrew Wyeth

Although critics have debated the value of Wyeth’s contribution to American art, there is no doubt that his influence is far-reaching. His paintings are featured in museums around the world including the Museum of Modern Art in New York, the Cincinnati Art Museum, the Smithsonian American Art Museum, the National Museum of Modern Art in Tokyo and the Academic des Beaux Arts in Paris. The artist received many awards and recognitions over the course of his lifetime, most notably the Presidential Medal of Freedom in 1963, the Congressional Gold Medal in 1988, and most recently, the National Medal of Arts in 2007. He also served on the French Academie des Beaux Arts and the British Royal Academy.

Wyeth is best known for his depictions of rural landscapes as well as portraits, especially those of a neighbor lady named Helga. He reportedly studied and painted her 247 times between 1971 and 1985 without either of their spouses knowing about the endeavor. Since his paintings reflect concrete images of both nature and people, he is officially recognized as a realist, though he himself insists that there is an undeniable abstract aspect to his paintings.

Andrew Wyeth has become an icon of sorts in terms of his influence on American popular culture. Here are some good examples of his powerful impact:

Although art historians will no doubt continue to debate Andrew Wyeth’s worthiness as a famed American artist and popular culture icon, one must remember his father‘s comment: it is not the consequence that matters, it is the art itself, and Andrew’s art remains.

The page was built with Mobirise site template