When the name Andrew Wyeth is spoken, the famous painting "Christina's World" comes to mind, being his most popular work to date. It exemplifies his mastery of unusual angles of perspective and his use of light to pinpoint time. The painting was inspired by a neighbour of the Wyeth family in Cushing, Maine named Christina Olson who suffered from infantile paralysis. Wyeth was inspired to paint her as he watched her gazing up at her house from the wide field in front of it.

Andrew Wyeth prints have been favourites among important world leaders. "The Trodden Weed" was a personal favourite of the former soviet leader Nikita Khrushchev while "Nicholas" was admired by U.S. President Dwight D. Eisenhower. "Her room" and "Spring Fed" are other favourite Andrew Wyeth paintings among his many other artworks.

Read more about the inspiration for recent works by Andrew Wyeth. 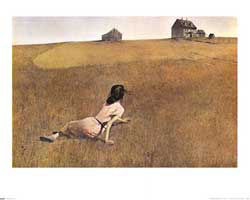 The page was made with Mobirise web template