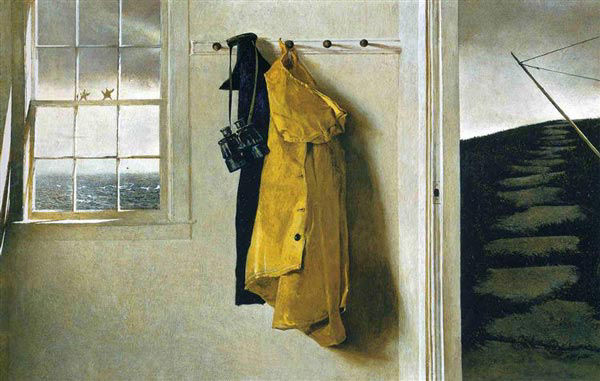 A squall is defined as a violent, sudden but brief windstorm that is often accompanied by snow or rain. And although such a disturbance is not obvious in Andrew Wyeth’s painting entitled ‘Squall’, its threat is strongly felt, not only through the particular objects depicted by the artist, but also in the palpable atmosphere of his composition.

Squall was painted in 1986 on Southern Island in Maine, where Wyeth spent his summers. On this particular day, his wife Betsy had gone out to watch a Friendship Sloop race. Her yellow raincoat and binoculars hanging on the coat pegs, and her absence from the house, as well as her presence at the race, under a threatening sky, became the inspiration for the piece.

Many of Andrew Wyeth’s compositions focus on hanging item(s), be it a lantern or a piece of clothing such as in his paintings ‘Curtain Call’, ‘The Quaker’, and ‘French Connection’. He is a master in selecting and using emotionally-imbued objects that are able to transcend his intention to viewers.
‘Squall’, a scene rich in colour and detail, was created using tempera on panel. The depth of colour is achieved by mixing the binding agent of egg yolk with pigment. It also adds longevity to the piece. It is one of the earliest techniques used in the art world; many classic Italian frescos were created in tempera. Although tempura work could take up to six months to dry, Andrew Wyeth was fond of its use, deeming the end result to be worth the wait. Moreover, the use of tempera is irreversible, making its utilization a notable effort. With regard to ‘Squall’, the sparseness of the composition, as well as the abstract message imparted by the hanging coat, carry an eternal quality that mirrors the technique itself – a very clever coupling on Wyeth’s part.
Inspirations
Andrew Wyeth was inspired by artists such as Edward Hopper (known for his stark realism), Winslow Homer (a landscape painter) and Thomas Eakins (a realist painter whose palette consisted mostly of browns and greys). In examining these artist’s paintings, one can see how they impacted Wyeth’s unique style, being his use of line as a mechanism to draw the viewer’s attention and create assumptions, an evident ploy used in painting ‘Squall’.

Page was started with Mobirise