In 1948, Andrew Wyeth painted one of his most famous works to date and titled it “Christina’s World”. It was done in tempera and depicted the figure of Christina Olson lying in a field on her family’s estate. The Olson house, located in Cushing, Maine, fascinated Andrew Wyeth and seemed to endlessly provide inspiration for his art. Wyeth met Christina Olson and her brother Alvaro through his wife Betsy James in 1940. For some reason, Wyeth believed that Christina and Alvaro, along with their Cushing home, possessed some endearing quality that was unique to Maine. Wyeth was entranced with the Olson estate, and visited the house so often that he was granted use of one of the bedrooms on the upper floor for an art studio, which he used for 30 years of his career. Wyeth’s character would get so immensely involved with the subjects of his art that his works were infused with realism and personality.

The Olson house depicted in “Christina’s World” was built in the 1700’s by the Hathorn family. Captain Samuel Hathorn renovated the house in 1871 and added bedrooms to the third floor. Christina’s mother, Kate Hathorn, met and married John Olson in 1892, who then took over the maintenance of the family farm. In 1929, Christina and Alvaro inherited the property and Christina lived there until two months before she died in 1968. The Olson home is now owned by the Farnsworth Museum and is open for public viewing. 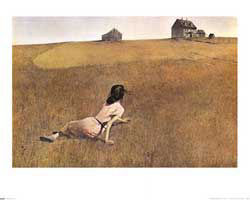 “Christina’s World” possesses such a haunting quality that it is understandable why so many people know of it and are touched by it. It is immediately discernable in the painting, that Christina is not simply in repose. With her frail legs peeking out from her pink gown and her torso twisted ever so strangely, it is obvious that she is on a mission. Wisps of hair have come loose from her ponytail and float gently in the breeze. Many of the small details imply determination and courage in Christina’s character. It is speculated that she is crawling across her property to visit the graves of her parents. Christina had a degenerative muscular disorder which worsened with age. She refused to use a wheelchair and preferred to crawl. Once a sickly child himself, perhaps Wyeth related to Christina on some hidden level. Wyeth contracted whooping cough at a young age, which left him with bronchial problems that made him prone to colds. After completing the third grade, Wyeth’s parents took him out of school and home-schooled him until the age of eighteen. Wyeth later indicated that because of his home-schooling and recurrent illnesses, he was left alone a lot of the time. There exits a solitary, yet courageous quality to this painting that perhaps Wyeth needed to impart. The melancholy and fierce resolve that emanates from this work is intensely mesmerizing and people were and still are drawn to it. The fame of “Christina’s World” rose from the mystery that the painting created. Christina’s face is not visible, and therefore the viewer is not privy to any emotion that her facial expression would have provided. However, through Andrew Wyeth’s mastery with the paintbrush, the painting emanates perseverance and silent strength, and instills in the viewer a desire to learn more about its history and its creator. “Christina’s World” captivates your attention and does not let go.

Made with Mobirise web theme