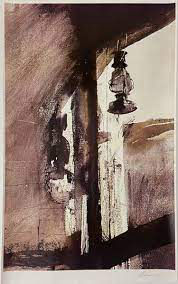 Caught in the Light of ‘Shed Lantern’

Andrew Wyeth hated it when people caught him at work, or spotted him with a watercolour block under his arm, so he found a way to minimize those dreaded encounters. Although famed for his tempera technique, which he was fond of, but which took up to six months to dry, Andrew discovered drybrush painting, a method that enabled him to work much faster. Not only did it take away the lengthy timeline associated with tempera, but it also offered Wyeth greater opportunity to elude any curious onlookers while he worked. ‘Shed Lantern’ was created during one of those ‘dodging’ adventures.

Not far from the Wyeth family home in Chadds Ford, Pennsylvania, stood a shed owned by Adam Johnson, described in Andrew Wyeth’s words as “a wonderful looking Negro whom I have never caught” (meaning, rightly caught on canvas). One day in 1954, he entered the shed, and upon noticing a hanging red lantern, decided to paint the object in drybrush watercolour on paper; hence, ‘Shed Lantern’ was born.

The powerful and unique effect of Andrew Wyeth’s drybrush technique was produced by encouraging the paint to attach itself sparingly to the paper; the result of which is especially noticeable in the lantern’s shadow in ‘Shed Lantern’. The method required the artist to add pigment to the brush, with very little water, and apply it on dry paper. Despite Wyeth’s speed of application (most likely prompted by his strong desire not to get caught, or perhaps his need to quickly catch the essence of a moving subject), the painting does not lose out in detail. Andrew Wyeth considered himself an abstractionist, and not the realist that many people deemed him to be. Although ‘Shed Lantern’ focuses on the specific features of the lantern, and emphasizes the atmosphere of the isolated shed, it pays no attention to any aspects of the background; consequently, the painting is agreeably more abstract in composition than realistic. The end result can be somewhat compared to a memorable “notation” made in one’s diary.
Note of Interest: The only time that Wyeth felt he might have “caught” Adam Johnson was in the painting ‘Above Archies’ when Wyeth “suddenly saw him silhouetted against a distant hill...There was something about that figure... that expressed how I feel about Pennsylvania”.

How to set up your own site - Click for more