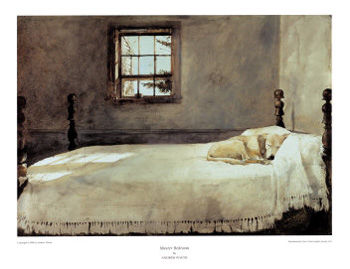 In almost all of Andrew Wyeth’s work, there is gentleness and serenity, a tender simplicity like the touch of a butterfly wing against your cheek on a breezy summer’s day. Most artists have a stand-out piece that gains acclaim for touching people; for Andrew Wyeth, Master Bedroom is that timeless piece.

Master Bedroom depicts a dog lying curled up on a bed in a peaceful afternoon slumber. The sunlight streams through the small window into the dim room and casts shadows on the blanketed bed. The walls are left unadorned. Although there is only the window, the bed and the dog, a cozy, comfortable aura emanates and encompasses the observer. Wyeth uses light and shadows to distinguish the passing of time which seems to highlight the simplicity of a dog’s life. The scene invokes a sense of fantasy and dreaminess in viewers. It is also interesting that Wyeth titled the painting Master Bedroom and depicted the dog at the center of the bed with its head on the pillow. Is the message that we are all masters of our own universe regardless of our species or level of consciousness?

Wyeth has the ability to take a single simple moment and make us feel something very intense; make us realize that there is beauty and truth in the ordinary moments. There is no need for vibrant colors or striking poses. It is the serenity of the sleeping dog that gives the painting its allure. The sheer tranquility of an Andrew Wyeth Master Bedroom print triggers one’s imagination.
The Master at Work
Andrew Wyeth is famous for his representational paintings. The artist preferred to paint landscapes and subjects that surrounded him in his everyday life. Simple objects and ideas in American culture were his inspiration. His fame and pertinence has endured because of his brilliant ability to infuse ordinary things with strong sentiment and a stirring power. Although the paintings seem to depict realist scenes, there exists always the presence of an emotional undercurrent, be it determination, beauty, or comfort.

For Andrew Wyeth, Master Bedroom depicts a very significant moment. This painting, with its soft, neutral coloring and tangible quietude, has become one of Wyeth’s most popular works. He finds meaning in very simple objects and ideas and is able to present them in a unique way. His vision of a bed with a dog was turned into a symbolic and peaceful haven that gently beckons the observer.

This page was started with Mobirise