Newell Convers Wyeth (1882-1945) was one of America’s most celebrated and prolific artists. Known as a generous man with a great love for life, N. C. Wyeth used his endless energy to paint more than 3,000 works. Today, his images of pirates, medieval life and Americana are treasured by many and reflect the brilliance of a man whose life ended tragically and all too soon.
From Humble Beginnings
Raised on a farm in New England, N. C. Wyeth was inspired by the beauty of his surroundings. Keen on learning how to bring the world around him to the page, Wyeth enrolled in the Massachusetts Normal Arts School where he studied under the guidance of Eric Pape and Charles W. Reed. In 1902, he went to Wilmington, Delaware and it was there that he met his idol, the great illustrator Howard Pyle. Pyle taught Wyeth the unique craft of illustration and two years later Wyeth went out on his own to begin his career as an illustrator. Accepting a commission from Scribner’s and the Saturday Evening Post, Wyeth decided to travel to the western United States in order to gain experience in painting western scenery. During this time, he worked as a ranch hand in Colorado and held other positions in Arizona and New Mexico. His various experiences proved fruitful as they inspired him to create such memorable magazine illustrations as “A Day with the Round-Up” and “The Indian in his Solitude.” 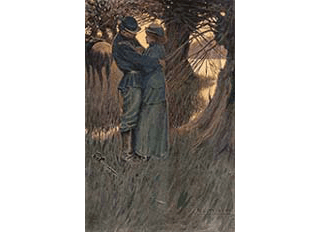 Working his Way into the American Imagination

Due to the initial success of Wyeth’s illustrations in the magazine Scribner’s, he was hired to paint the illustrations for more than 25 books in the Charles Scribner’s Sons Classic Series. These books were very popular at the time, and many today are still in print.

The Head of a Golden Ancestry

Having achieved success, N. C. Wyeth turned his attention to a number of other artistic pursuits such as the egg tempura medium and mural painting. His work began to appear in a number of exhibitions across the country. It was at this time that Wyeth began nurturing the artistic talents of his four children, Henriette, Caroline, Ann and Andrew. Under his guidance, all became successful artists in their own right. His only son, Andrew Wyeth, has become a famous and celebrated painter in American history.

One of America’s Greats

In 1945, N. C. Wyeth was tragically killed in a train crossing accident. Although his life was sadly cut short, Wyeth’s legacy still remains closely guarded in the hearts and minds of so many people who adored him. His reputation as one of the great illustrators in American history is firmly entrenched.